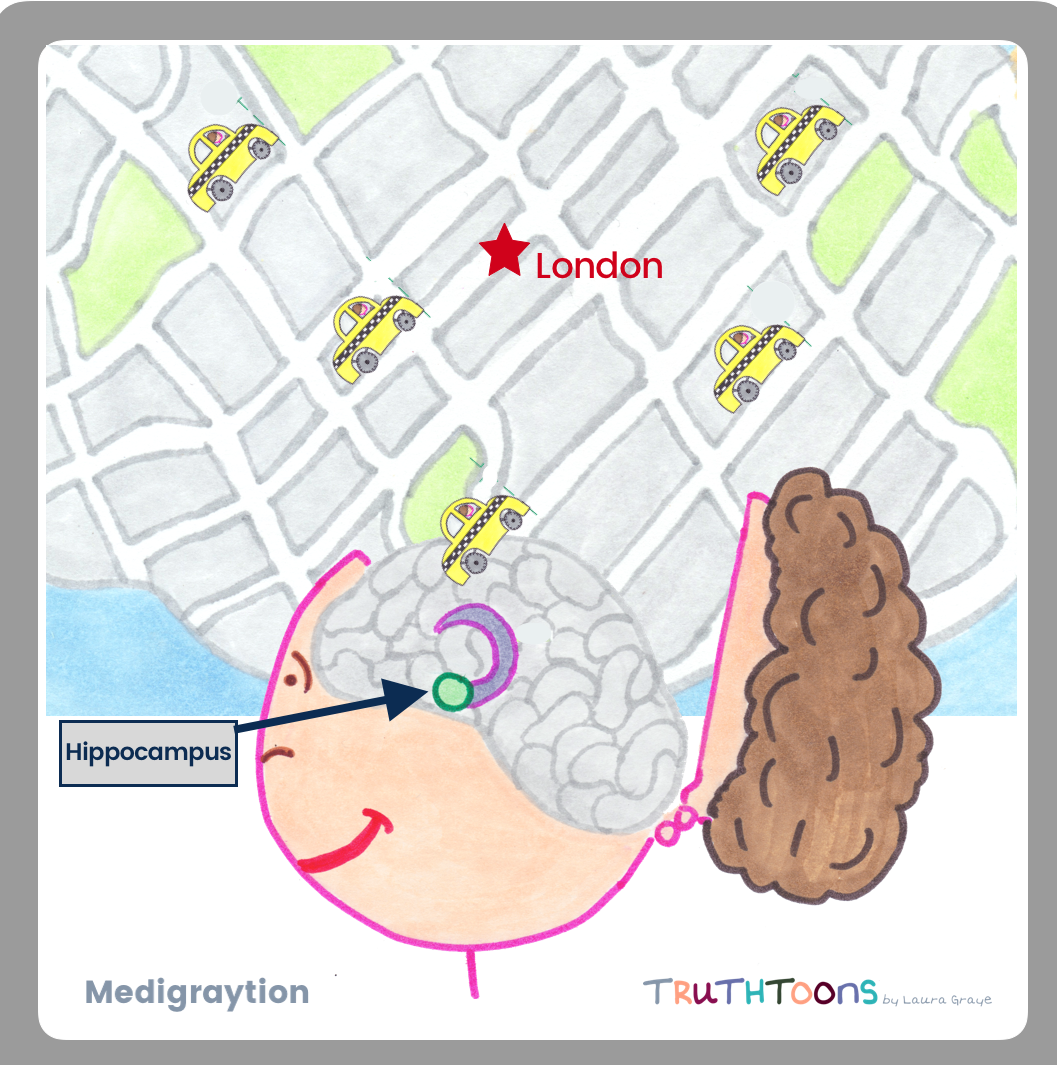 A True Story Proving You Can Change Your Brain!

Once there was a very smart lady named Eleanor who worked at a college in London. Eleanor studied the human brain. One day Eleanor had an idea. She wanted to study the brain of taxi drivers to test if their brains were different. You see, London taxi drivers are known to have extra good memory for navigation. It takes an average of 4 years to become licensed as a London cabbie and they must memorize close to 25,000 streets!
Eleanor remembered a study which showed migrating birds had an area in their brains which was bigger than the same area in non-migrating birds. This area is called the posterior hippocampus. You can pronounce those words easily: post-ear-eyore hippo-camp-us. That made Eleanor wonder if the posterior hippocampi of taxi drivers brains would be bigger too! Hippo-camp-i is the word for two or more hippo-camp-us.

Eleanor started her research by gathering money for her study. She then gathered a group of expert taxi drivers and a group of non-expert drivers. For the tests, Eleanor had both groups play a video game where they had to drive around the streets of London. The taxi drivers were much better at this game. In research, “much better” is a significant change, meaning there is enough of a difference that it can be marked as notably valid. It was validated that the taxi drivers were notably better at the navigation game. Then Eleanor sent the taxi drivers and the non-expert drivers to another lab where they measured the size of their hippocampi. Sure enough, the cabbies posterior hippocampi were larger!!

Eleanor then brought in very wise doctors who had gathered years and years of medical knowledge in their brains. Eleanor wanted to see if all the smarts in their brain made their hippocampi bigger. It did not! The doctors’ hippocampi were regular sized just like the bus drivers. This was very interesting to Eleanor and the other researchers. It led them to want to know more about these super-hippocampi-taxi-drivers.

Eleanor was finding more proof that certain precise skills in navigation made a part of the brain grow. This was really important information because at the time of Eleanor’s study there were more and more children in the world struggling with the function of their brains. If Eleanor’s study could help scientists understand the brain better, then these scientists could possibly help our children.
Eleanor was so interested in her taxi drivers and their super-sized-hippocampi that she wondered if old retired taxi-drivers’ hippocampi would still be larger or if they would shrink after they stopped driving their cabs. So she set off to find taxi drivers who were retired. Then she found taxi drivers who were the same old age but were not retired. Eleanor was smart in this way. She knew an argument could be made that it was old age that made the hippocampus shrink, so she had to prove that age was not a factor. Sure enough, the taxi drivers who were still driving full-time had bigger than average hippocampi and greater navigation skills than average. The retired taxi drivers’ hippocampi were smaller than the full-time taxi drivers and their navigation skills were not as good as the full-time drivers. But the retired taxi-drivers still had bigger hippocampi and better navigation skills than the non-expert drivers. This was great news for Eleanor and her team! The brains of these retired cabbies were proving to be plastic and changeable.

Eleanor’s study kept growing. She now wondered if there was a downside to these bigger hippocampi. Eleanor’s team questioned if the cabbies expertise in driving skills takes away from their growth in other skills. Sure enough, tests came back showing these navigationally smart taxi-drivers were slower when tested for other areas of learning new information and certain spatial memory. Uh oh.
Eleanor asked the friends she worked with if they should next look at brand new taxi-drivers and measure the growth of their hippocampi over time. Everyone screamed with delight at this idea! This would help Eleanor and her gang prove that more and more use and exercise of navigation skills grows the posterior hippocampus over time.
This study would take a long time and a lot of money. Eleanor was determined. And so, off she went to gather a group of brand new cabbies who were just beginning to study for their taxi driver licenses. Eleanor also gathered another group of non-expert drivers. Her research team measured everyone’s hippocampi. At the beginning of the study, they all appeared roughly the same size.
Then Eleanor waited four long years until the group of cabbies was initiated and trained for licensing. During that time, Eleanor spent long hours working with other researchers. She made friends and enjoyed her life but was also very focused on her work with the taxi drivers.
At the end of four years, Eleanor brought the now licensed taxi drivers and the non-expert drivers into her lab and she remeasured everyone’s posterior hippocampus. It turns out the taxi drivers hippocampi had grown but the non-expert hippocampi had not!!! It appears the cabbies had exercised the neurons in that area in their brain so much that like a muscle on the arm of a bodybuilder, it had actually grown in size.
Eleanor was so excited. Her theory and all her hard work had her closer and closer to understanding the plasticity of the brain. Her college was so proud of her. Eleanor’s research became known throughout the science world. One day the office of the Nobel Prize called Eleanor. They were so pleased with all her hard work and efforts that they wanted to award her the Ig Nobel Prize. Eleanor was beside herself. She accepted her prize and in her speech, she thanked her research friends, Katherine, and Hugo who played a huge role in all of the research!